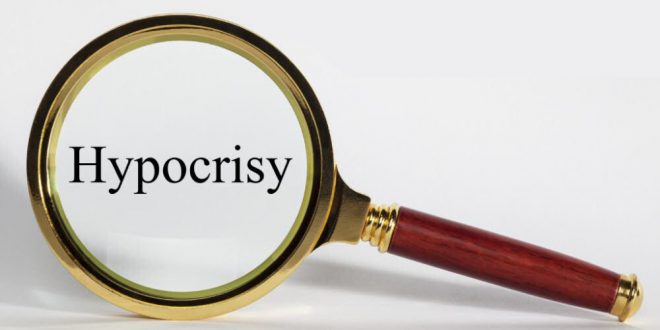 The three stages of Hypocrisy

‘In the terminology of Islam, atheism and hypocrisy have the same meaning. The contradiction of speech and action is called hypocrisy and it has three stages:

In these three stages of hypocrisy, the difference is that in the first stage (hypocrisy in actions), the Iman and belief remains and many branches of actions are present but there is hypocrisy in a specific branch of action. In the second stage (hypocrisy in belief), there is no Iman (‘Aqaaid) and no Islam (actions). There is only a claim which is purely for show i.e. despite having pure disbelief, one claims to be a Muslim. And the third stage is worse than this – together with hypocrisy in belief, it is coupled with distortion of the Quran and Hadith.

Today, the apparent common sin is that there is a claim of Islam by the tongue, but the actions are such that even a kafir feels ashamed. Hypocrisy in actions is something almost everyone is afflicted with, where Iman is claimed by the tongue but the actions are contrary. However, many people are actually suffering from worse; hypocrisy in belief i.e. they are only called Muslims because they have a link with Muslims, otherwise there is no Islam in their hearts, nor respect for the din of Rasulullah (sallallahu ‘alayhi wasallam), nor belief in the sayings of Rasulullah (sallallahu ‘alayhi wasallam). In the present age, heresy has developed into fashion. The gist of it is that Muslims are currently caught up in hypocrisy in actions and hypocrisy in belief. Today the disgrace and misfortune that we are experiencing is, in reality, the punishment of this hypocritical conduct.